How to Fold Towels to Hang

Most people know that they should fold their towels before hanging them on a towel rack, but not everyone knows the best way to do it. When it comes to determining the best method of folding towels to hang them, you first need to understand why the method you use matters.

Why Folding Your Towels Properly is Important

How you fold your towels may not seem like a big deal, but the way you hang up a towel can have an impact on the cleanliness of your bathroom, the pleasantness of your bathing experience, and even your health.

When it comes to keeping your bathroom tidy and clean, one of the simplest things you can do is fold your towels properly. This may seem like a small detail, but if your towels are constantly falling off the towel rack or getting wrinkled and bunched up, it can make your bathroom look cluttered and messy.

Ensuring Your Towel Is Dry Before Use

Failing to fold your towels before putting them away or hanging them up can also increase the amount of time it takes for them to dry, meaning they may still be damp when you need to use them again.

When you fold your towels correctly before hanging them up, you can increase the surface area that is exposed to the air (or, if you’re using a heated towel rack, to the source of heat) and encourage faster, more even drying.

Additionally, when your towel stays damp longer, the risk of mold and bacteria growth increases, which can be harmful to your health. This growth can also cause your towels to develop a musty odor. As a result, poorly hung, damp towels are unpleasant to use and sometimes unsanitary.

The Best Way to Fold Towels for Hanging

There are many different ways to fold towels so that they hang neatly on a towel rack. Here are two of the simplest and most popular methods.

The hotel fold is a variation of the basic fold and is often used by hotels and resorts. To do this fold, start with your towel laid out flat on a surface. Then, fold one end of the towel over towards the center, making sure that the end is lined up evenly with the edge of the towel. Next, take the other end of the towel and fold it over the first fold. Finally, fold the towel in half lengthwise to create a neat, compact rectangle.

How to Hang Towels So They Dry Quickly

Once you’ve folded your towel, it’s time to hang it up. There are a few things you can do to ensure that your towel dries quickly and doesn’t become musty or mildewy.

Hang in a Well-Ventilated Area

Avoid hanging towels on hooks or over doors where the material is bunched up, as this can prevent air from circulating and cause your towel to take longer to dry.

Don’t bunch towels together on one towel rack or hook. When towels are crammed together, they can take longer to dry. Instead, hang each towel separately so that air can circulate around all sides of the towel.

Use a Heated Towel Rack

If you have a heated towel rack, use it! The heat will help to speed up the drying process, making your towels ready to use again in no time.

Fold Your Towels So They Stay Fresh Longer

If you want your towels to last longer, it’s important to take care of them and fold them correctly. By folding your towels properly and hanging them in a well-ventilated area or using a heated towel rack, you can enjoy a dry towel when you need it — and keep your towels smelling and feeling fresh.

Invest in Luxury With the Best Brands

What Can A Heated Towel Rack Do? 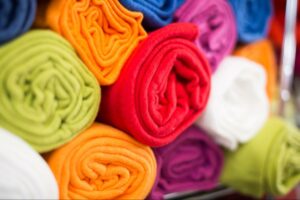 How to Keep Oversized Bath Towels Clean and Fresh 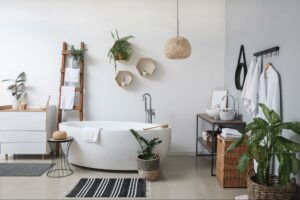 How to Prevent Mold in Bathroom Spaces